I don't want to hear what you're having for breakfast

Posted by HelloThere on December 02, 2011
When I tell people how much I love Twitter and other social networking sites the response is often "I just don't get it. I really don't want to know what someone is having for breakfast or if they have to go to the bathroom or that they are tired and going to bed". This sort of leads me to believe that they are either looking at Twitter, which means there is still hope for them, OR that they are getting their information from someone else and in that case they are completely misinformed and really without hope because they don't really want to think for themselves, in which case I can not help them. I haven't quite figured out yet how to tell between the two.

So, just in case you were wondering, and you missed my tweets this week, it was a wild transition from Thanksgiving to Christmas. And here it is. 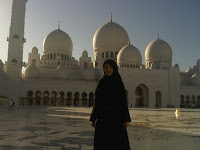 The biggest thing for my family is that this is the first holiday back in our house after having spent last year in the Middle East. They don't celebrate Thanksgiving over there OR Christmas. There was a giant Christmas tree at the Mall which was sort of strange. Of course shopping is an athletic event so spending time and money at the Malls is encouraged.

The thing that helped was that Eid al-Adha fell just before Thanksgiving and so we did have a big feast with friends. The second thing was that National Day was celebrated the first week of December and since the colors of the United Arab Emirates are red, green and white, every palm tree in the city was lit up in one of the national colors which coincided nicely with Christmas. So, we could pretend a little bit that the palm tress were lit up for the holidays. But of course there was no snow unless we went to the indoor ski resort. 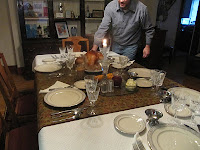 This holiday season we are not taking anything for granted. We celebrated Thanksgiving with a 24 pound turkey - there are still leftovers in the freezer. The minute the Thanksgiving dinner was done we cleaned everything up and the next morning we woke up and started decorating for Christmas.

Christmas music has been playing almost non-stop around here and we have Christmas movies on DVD just in case there is not a Christmas movie to watch on TV every night of the month. 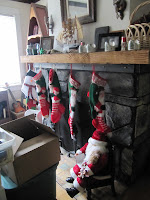 In the Middle East the Internet is filtered and you hear stories on occasion of bloggers being put in jail for expressing their opinions.

So, you may not want to hear what I'm having for breakfast but if you follow my updates on Twitter this holiday season you will find an enthusiasm for the holiday and a thanksgiving for being able to freely say what I am thinking about on whatever it is I want to think about. Even if that is just what I'm having for breakfast.
Christmas Freedom of Speech holidays Thanksgiving TMOM Travelingmom.com twitter