Is there a category for this on eBay? The Heart of a Patron Saint

Posted by HelloThere on March 04, 2012
In keeping with the Irish theme for the month of March I came across this story today.

DUBLIN (AP) — Somewhere in Ireland, a burglar has the heart of a saint.
Officials at Christ Church Cathedral in Dublin said Sunday they're distraught and perplexed over the theft of the church's most precious relic: the preserved heart of St. Laurence O'Toole, patron saint of Dublin.

There have been several stories over the past few years of these types of ancient artifacts being stolen - but why?  A private collector could never resell these items.  It is a shame that something that is freely viewable to the world has to be taken.

There is a Wiki page for this saint but when I went to the list of Saints on Catholic.org his name wasn't listed.  This made me wonder what was up with that.  Was he a real Saint? Was this story a scam? 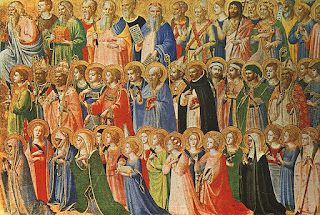 It seems the reason his name didn't come up on the list of Saints is because he was a "Patron" Saint.  To become a saint, a full fledged saint, the person must be appointed by the Pope.  I'm still not entirely clear on the criteria to become a patron saint but it seems as though it is not exclusively a Papal decree.  Apparently, there are also Celtic saints, Buddhist saints, Muslim saints and other saints.  Being that St. Laurence O'Toole was from Ireland I started my search with the Catholic saints.

I went back and forth from the Catholic Encyclopedia and Wikipedia to try to piece together the story behind when St. Laurence O'Toole became a saint.  The story was a little confusing to me but what was clear is that he love Ireland and was a keen politician bringing peace between countries.

I have always considered St. Christopher to be one of my patron saints - The Patron Saint of Travelers.

Do you have a Patron Saint?