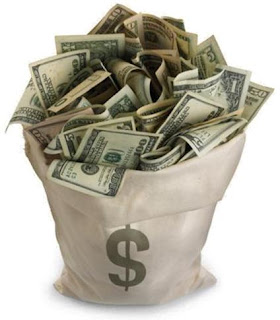 Tonight George Clooney is sponsoring a $40,000 a plate dinner as a fundraiser for President Barack Obama. President Obama's people say that the push for fund raising is vital this year because they are up against big money contributions pouring in for the Republican party.

In Idaho, the answer is: We can pay a teacher's salary for an entire year.

In Idaho, I am running for the state senate in district 7 and we were required to submit our pre-primary campaign finance reports this week. You can check out the website of the elections office and read the PDFs of everyone's reports. I faxed in the form yesterday and reported all three donations that I have accepted in the total of $300. These donations have gone to covering the expenses incurred in just filing to be on the ballot, the purchase of some business card paper so I could print off business cards at home, and some gas money to get to events and talk with potential voters. As of the filing date I had spent a little over half that money.

It is interesting reading to see how much money is spent on our small, local, elections. Several candidates had reported receiving campaign contributions between 20,000 and 30,000 dollars.  They aren't doing anything wrong - that is just how the system works.

There have been attempts to reign in this spending with campaign finance reform but what has resulted from those efforts is an even more ridiculous campaign season with super PACS popping up being able to support candidates without being directly associated with the candidate.

It has to start with each one of us. We can't depend on our politicians to reign in government spending. They seem to be like sharks; they get one little taste of blood - or in this case free money - and they circle around wanting more. Over the past week I have read some of the most ridiculous excuses for "having" to accept this money.

We complain about the politicians spending away money they don't have and digging our kids into a hole that they won't be able to get out of. But we don't want to hold ourselves and our own small communities accountable as part of the culprits. We want to cut spending as long as it is THAT spending that is going on somewhere else. Not the spending that is going on right here in our very own back yards. What if the local utility company gave $1000 to Habitat for Humanity to help build a home instead of to a favored politician. Imagine the long-term good that $1000 would do. Instead, there is a politician out there who is now somehow indebted to the utility company. How does that help our communities.

Last night on the radio the host was asking people to call in and tell him where the cuts in government spending should come from. Every suggestion was met with the same reply "that's a drop in the bucket". Maybe starting at the state level and holding candidates accountable for their spending would be a good place to start. Even if it was only a drop in the bucket.

In the age of twitter where we are learning to communicate our ideas in 140 characters or less, why shouldn't we hold our local political races to a similar standard? If you can't communicate your message in $1400 or less are you really going to be able to cut the governmental budget?