THE NEED TO BE "MALADJUSTED"

The Power of Non-violence 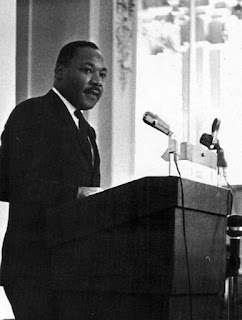 From the very beginning there was a philosophy undergirding the Montgomery boycott, the philosophy of nonviolent resistance. There was always the problem of getting this method over because it didn’t make sense to most of the people in the beginning. We had to use our mass meetings to explain nonviolence to a community of people who had never heard of the philosophy and in many instances were not sympathetic with it. We had meetings twice a week on Mondays and on Thursdays, and we had an institute on nonviolence and social change. We had to make it clear that nonviolent resistance is not a method of cowardice. It does resist. It is not a method of stagnant passivity and deadening complacency. The nonviolent resister is just as opposed to the evil that he is standing against as the violent resister but he resists without violence. This method is nonaggressive physically but strongly aggressive spiritually.