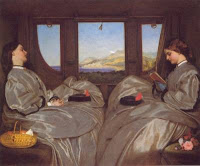 “I never travel without my diary. One should always have something sensational to read in the train.”


This is probably my favorite quote from the play The Importance of Being Ernest written in 1895 by Oscar Wilde. Almost 100 years later Doogie Howser wrote down his thoughts on the computer in a digital journal.

But now we Blog. We blog and tweet. In early 2011 it was estimated that there were over 156 million blogs. That's a lot of blogs!

Through social media we can sift through these millions of blogs and find common interests. This is one of the reasons that I am so excited about my first time attending the Wine Bloggers Conference in Portland this month.

Networking at conferences is the reason I first registered for this conference. I love being able to talk with other people who are passionate about what they are doing and share ideas about better writing, blogging, and community building. And I have been to a number of other conferences in the past. Typically, I register for the conference and look over the agenda of speakers and make a plan for what I hope to find at each conference. Often times I find myself on facebook or twitter shouting out to my network “Is anyone going to this conference?” wishing I knew in advance who was going so I could make plans before the event.

The great thing about the Wine Bloggers Conference is that the organizers have involved the attendees all the way along. We received a list of preliminary attendees months ago and then another list shortly after they sold out. There have been facebook groups started and conversations sharing blogs for weeks leading up to the event. I have never been to a Wine Bloggers Conference before but I feel like I will be walking into a room of old friends by the time the conference starts.

The organizers of this event have ensured that we are all going to get as much out of the event as we want and that the networking with other participants can begin even before the doors open on site. This is the primary reason I am so excited about attending this conference and why you should seriously consider putting future Wine Blogger, Beer Blogger, International Food Blogger (Aug 24-26, 2012), or Fitness and Health Blogger conferences on your list of the must attend conferences.


On another wine note: My younger brother called the repairman to come fix his wine fridge.  They told him that they only come out to repair primary refrigerators.  He was sort of surprised by this comment and replied "This is my primary refrigerator!"  It's true - it is.  If you don't have a wine fridge you can check out some really cool ones at WhichWineCooler.com