Posted by HelloThere on October 16, 2012
On my blog I like to write about every day reasons to celebrate.  This last Saturday was one of those days thanks to Ron Crane, Idaho State Treasurer, and a wonderful assortment of sponsors who brought the Smart Women Smart Money Conference to Coeur d'Alene Idaho.

There were some fantastic moments throughout the day.  The day started off with the Lake City High School Stomp class kids who entertained and woke us all up.  This was followed up by an inspirational hour with Nicole Sherman.  The entire event was Emcee'd by Carolyn Holly and you just can't not be energized when you're around Carolyn.

After a morning of motivation and some awesome small group workshops on financial management we went back into the auditorium for what was a true highlight of the day (for me).

Every September when I was growing up we would pull the TV trays out into the living room, heat up those totally groovy TV dinners that were in aluminum trays that separated the corn from the chicken and the mashed potatoes (that's what the white stuff was supposed to be), and we would settle in on the couch for an amazing evening with Bert Parks and the contestants of the Miss America Pageant.

My mom was never actually Miss America but we did live in Washington state and so for the viewing of the Miss America pageant she would put on a green and white dress (white long sleeved top with ruffles and green from the waist down to the floor).  She would come out into the living room with her dress and a Miss Washington sash that she must have picked up at the Goodwill.  We would all giggle and laugh and practice our best Miss America waves and keep score on who we thought should win or at least be in the top 5.

When I moved out on my own I continued the tradition of watching the show.  I left the green and white dress for my mom but I still invited friends over to watch the Miss America Pageant with me.  My friends had all arrived on time and we were having a great party when it became time to turn on the TV and watch the parade of states.  My friends all looked at me kind of funny and one friend said "Wait a minute - we're actually watching the show?  I thought you were kidding".

Nope nope nope - I do not mess around or joke about my Miss America. 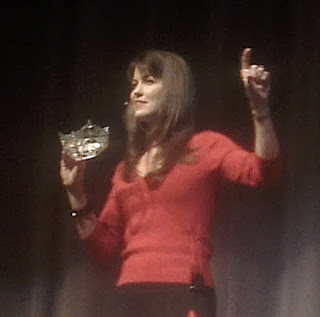 So, you can only imagine how thrilled I was to be in the auditorium when Tara Dawn Holland Christensen took the stage at the Smart Women Smart Money conference.  She told us all about the perseverance that it took to become Miss America (this was a fantastic story but that's not the point) and then her life after the crown of going back to school and becoming a Real Estate agent so she could still be a stay at home mom but also help with her new family business of buying homes and then helping families get into home ownership by renting to own.

After her inspiring story of never giving up she met everyone at the conference personally out in the reception area.

Here is why I Loved Tara Dawn in 1997 and why I am a bigger fan today:

We had already decided that she had the best evening gown of all time at the crowning moment during the pageant.  I still think her evening gown should be in the record books in the top 5 all time best.  But then! At the moment when they announced her name as the new Miss America she did something that will always be in my mind as a top crowning moment.  She didn't put her hand over her mouth and start to cry with this look of surprise on her face - No - she heard her name and threw her hands up in the air and said YES! Sort of similar to Michael Phelps when he realized he had just won his bazillionth gold medal. 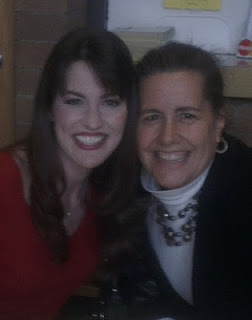 It was a very empowering moment.  She had worked really hard and she had competed against hundreds (over several years) of other amazing women and tonight she was Miss America.  She had accomplished something very few people ever will.  It was AWESOME.

Now, if I had been Tara Dawn I may have just lived out the rest of my life content to be Miss America 1997.  I would wear the crown as much as possible and whenever anyone asked what I did I would say "I'm Miss America!".  But here is the part that makes me a bigger fan today.  Not only does she look even more amazing than she did in 1997 (considering time machine something here because she looks like she is still in her mid 20's) but she did not sit around just eating bon bons, wearing the tiara, expecting something from the world because she was Miss America 1997.

Today, she is a stay at home mom, wife, real estate agent, business owner, motivational speaker and all around nice person.  Her and her husband are making it possible for families to accomplish their dreams of owning their own homes.  Bigger Fan.

So, this was my Miss America moment this past weekend and my reason for celebrating today.

Thanks to everyone at Smart Women Smart Money for making this moment happen for me and all the other women who were there.  I can hardly wait for next year.

You can get Tara Dawns CD on her website TaraDawn.net

(Yes she is tall)