Posted by HelloThere on November 20, 2012
November 20 we celebrate National Hug a Runner Day.  I consider myself a runner - but actually I'm more of a shuffler.  I run for fun.

It all started in 9th grade.  All the cool kids in school were going out for track.  I wasn't very good at any of the events but I was smart.  I looked at the tryout sheet and saw that there were 3 spots open on the team for the Mile race and only 1 person signed up.  So, naturally, I made the team.  I was able to go to all of the track meets on the track bus with all the cool kids and all with very little talent at all.  It turns out I helped the team because the overall team score was made up of points and I brought a point to the team just by showing up.

I was terrible.  Every race I came in last.  But that somehow took the pressure off and I was able to really enjoy myself during that year.  At the end of the season the team was allowed to take 2 people in each race category to state and so, even though I had come in last in every race I had run that year, I was going to state.  It was fun looking at the faces in the crowd as they were trying to figure out what was going on as I rounded the corner toward the finish line at the state meet.  My teammates were going wild!  I was not last. 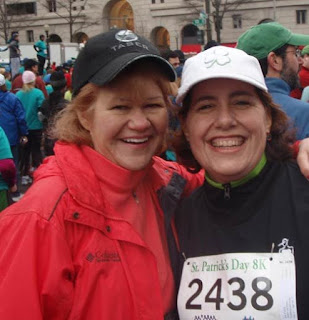 Since, then I have been in all kinds of fun running events;  The Crater Lake Marathon (10k portion), Bay to Breakers, Bloomsday, Baltimore Marathon (5k portion), and the DC St. Patty's Day run just to name a few.

This week I am looking forward to the Turkey Trot on Thanksgiving Day.  I may not be fast but at least I'll be smiling.

So get out there and Run for Fun! And today give your favorite runner a big hug (if you can catch them).

*Hugs really aren't my thing - so instead I am including this picture of me giving a hug to one of my all time favorite running buddies Monty.  Until next time cuz!
10k 5k Back to the Future celebrations foot races Marathon National Hug a Runner Day track