Internet Safety is the new "Talk" 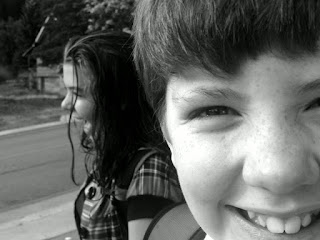 You know how there is that initial excitement that you have when you bring your new baby home for the first time?  This can last for awhile but then you somehow realize you have no idea what you are doing and someday you are going to have to have "The Talk" with them.  THEN, what are you going to do? How are you going to handle that?

I have been super lucky.  We have four awesome kids. (Not all pictured here). We started out with two boys and then had a girl and another boy.  My husband mostly handled "The Talk" with the boys.  Then while I was handling the age appropriate conversation with our daughter the older boys basically told her that they would be running blocker for her as though she were the quarterback of our football team and they were her linemen. And then my husband picked up again and had "The Talk" with our youngest.

I got away pretty easy.

But now, with all the new technologies we have in our homes, we have to have a new talk with our kids. 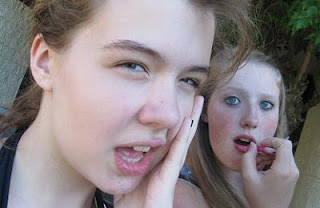 It is extremely important and sometimes overlooked.  We watch three year olds handle an iPad with the grace and finesse of an old World Dutch Master and we somehow confuse their ability to figure out these tools with actual decision making.  I talk to alot of parents who laugh about it and say "My kid could teach me how to use the iPad, smartphone, DVR __________________ (insert latest technology here)."

Technically, kids are fearless about trying new technology.  They are unincumbered by that feeling of having to know exactly how it works to be able to enjoy it. But this does not mean that they are hardwired with the knowledge needed to keep themselves safe when using these technologies.  They still need parents.

Parents need to talk with their kids about:


Parents often don't think they even have to talk about this last one because it seems so absurd - who would do that. The answer is an alarming amount of young kids are doing this thinking it is just harmless fun - that they somehow trust the recipient of this picture to keep it just between the two of them - that perhaps the recipient will love them more - there are a number of reasons but the most important thing to know is that it is happening and there are good kids out there making this split second mistake.

The best way for parents to have "The Talk" with their kids is to start early.

The very good news is that parents don't have to do this alone. 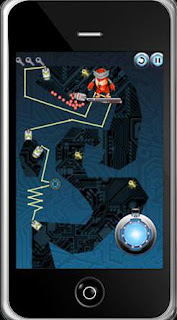 This past month I was sent a download of the game HaxAttacks. It is available through iTunes.  It is an addictive game that features Internet Safety tips and a fun game of making sure your good data gets to where it needs to go in cyberspace and that the viruses stay out.  Playing a game with your kid is one of the best ways to get the conversation started. This game would be appropriate for any age really but the messaging seems to me to most appropriate for elementary school kids and up through teens (but I must say I did find myself playing this way longer than I should have and I was playing it all by myself). It's a fun game besides having some great tips.

There are some reviews on iTunes that this game did not load - I have an older original iPad and I did need to update the software on my iPad before installing the game but after that it installed and plays with no problems.

Another important game you should play with your kids is called Alex Wonder designed by Parry Aftab, founder of Wired Safety. It's a free download to your computer and again gets the conversation going about being safe online.  My tween boy LOVED this game.  He loves the idea of being a detective and this gameis very empowering for kids in that regard.

Don't worry that you may not have all the answers - you won't.  But you're not alone.


Here is the MOST important piece to all of this: Play these games early with your kids and have the conversation as soon as they start playing interactive games.  By doing this your kid will know that they can come to you and talk to you when/ if they ever do see something online that makes them uncomfortable.  You want them to know that they can come to you even if, heaven forbid, they do make a split second mistake and for some reason make a bad choice with their safety online.

It's time to update The Talk.


We will be featuring more about each one of these games during Family Video Game Month.  There is a twitter party scheduled for November16 and various discussions on Apps during the last week of the month.