Posted by HelloThere on November 27, 2012
On our very first date we went to a concert. I adore going to concerts and so I was thrilled to be asked to go to a concert by the cute guy who lived up a block from me. It didn't matter that I had never heard of this person we were going to see. There is something awesome about live music.

It was a John Cage concert.

After that show, that night, I knew one thing for sure - hanging out with Tom would mean that life would never be boring. 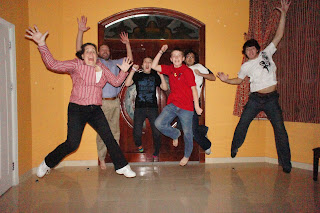 25 years and four kids later it has never been boring.

Now our kids are getting older (two in college and two in high school). Many of my girlfriends have been talking about that day that seemed so far away when our babies were crawling across the living room floor;  What do we do when the kids are out of the house? Will we still have something to talk about when the kids aren't the center of the conversation?

This past summer someone very close to me passed away. She had planned and planned her entire life to raise her children and then she would take off with her husband to see the world. That someday never came.

We can get so caught up in the raising of the kids and growing the careers that we sometimes forget what brought us together in the first place.

This is the subject of next weeks Traveling Mom Twitter party. Renewing Romance. This made me think of the words from the song Moon River and it has made me appreciate that over 25 years ago I took a chance on a drifter like me.

Two drifters, off to see the world


There's such a lot of world to see
We're after the same rainbow's end, waitin' 'round the bend
My huckleberry friend, moon river, and me


Join us on Monday December 3 for the TravelingMom.com Twitter party using the hashtags #TMOM and #TMOMHope to talk about romance and travel and keeping that spark alive!

This twitter party is sponsored by Sony in conjunction with the release of the DVD Hope Springs starring Meryl Streep and Tommy Lee Jones.  RSVP to join us for this twitter party for a chance to win fun swag from the movie Hope Springs and a grand prize of $200 gift certificate compliments of B&B.com.

This post along with the Twitter party are sponsored by Sony but they are in no way responsible for the fact that the first concert my husband took me to was a John Cage concert.
DVD family Hope Springs relationships romance Sony travel Travelingmom.com