January 25th is Robert Burns birthday.  He is probably most famous for writing Auld Lange Syne which is sung around the world at the stroke of midnight on New Years Eve.

My mom is the one who introduced me to Robert Burns. When she was just a wee lass she would recite Burns poetry in school.  She grew up in a pre-Internet time that rewarded silliness and so she would recite these poems as fast as she could and all of her classmates would crack up.

One of her favorite poems to recite was For A' That


In recent years my mom has thrown the most amazing Robert Burns party.  Friends gather in their finest Scottish attire, sip fine scottish Whiskey, and the men recite Robert Burns poems. *To make this a kid friendly party I skip the whiskey. 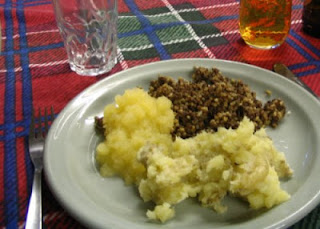 She also cooks up an amazing polish sausage dish to be representative of the more traditional meal, Haggis.  (Pictured here is an authentic  Haggis plate with neeps an tatties.)

Out of curiousity, I polled a group of women wine writers about what kind of wine they would serve with Haggis. Thea Dwelle of Lucious Lushes, who had actually tried Haggis, said "A LOT of wine".  Catie McIntyre Walker of The Wild Walla Walla Wine Woman suggested matching it with a nice Syrah or a bold Cabernet.

My dream vacation would be to fly over to London, rent a car and drive up to Scotland and visit the Tower Edinburgh, St. Andrews Golf Course and then head across the island to Ayr to see the Robert Burns museum.

Until then I will recite poetry every January 25th (and recite it quickly).

My memory's no worth a preen;
I had amaist forgotten clean,
Ye bade me write you what they mean
By this "new-light,"
'Bout which our herds sae aft hae been
Maist like to fight.

In days when mankind were but callans
At grammar, logic, an' sic talents,
They took nae pains their speech to balance,
Or rules to gie;
But spak their thoughts in plain, braid lallans,
Like you or me.

In thae auld times, they thought the moon,
Just like a sark, or pair o' shoon,
Wore by degrees, till her last roon
Gaed past their viewin;
An' shortly after she was done
They gat a new ane.

This passed for certain, undisputed;
It ne'er cam i' their heads to doubt it,
Till chiels gat up an' wad confute it,
An' ca'd it wrang;
An' muckle din there was about it,
Baith loud an' lang.

Some herds, weel learn'd upo' the beuk,
Wad threap auld folk the thing misteuk;
For 'twas the auld moon turn'd a neuk
An' out of' sight,
An' backlins-comin to the leuk
She grew mair bright.

This was deny'd, it was affirm'd;
The herds and hissels were alarm'd
The rev'rend gray-beards rav'd an' storm'd,
That beardless laddies
Should think they better wer inform'd,
Than their auld daddies.

Frae less to mair, it gaed to sticks;
Frae words an' aiths to clours an' nicks;
An monie a fallow gat his licks,
Wi' hearty crunt;
An' some, to learn them for their tricks,
Were hang'd an' brunt.

Nae doubt the auld-light flocks are bleatin;
Their zealous herds are vex'd an' sweatin;
Mysel', I've even seen them greetin
Wi' girnin spite,
To hear the moon sae sadly lied on
By word an' write.

But shortly they will cowe the louns!
Some auld-light herds in neebor touns
Are mind't, in things they ca' balloons,
To tak a flight;
An' stay ae month amang the moons
An' see them right.

Guid observation they will gie them;
An' when the auld moon's gaun to lea'e them,
The hindmaist shaird, they'll fetch it wi' them
Just i' their pouch;
An' when the new-light billies see them,
I think they'll crouch!

Sae, ye observe that a' this clatter
Is naething but a "moonshine matter";
But tho' dull prose-folk Latin splatter
In logic tulyie,
I hope we bardies ken some better
Than mind sic brulyie.