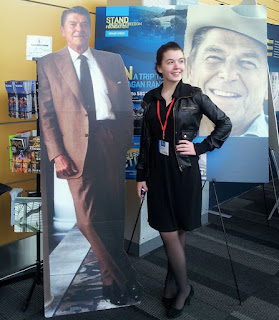 February 6th is the anniversary of Ronald Reagan's birth.  I know this is true because I read it on Wikipedia.

Even though he passed away over 8 years ago his words ring true today almost as much as the day he first said them.

At the time he said this immortal phrase he was talking about the Cold War between the US and Russia.  Before this there was really only one other phrase in history that rang with such political clarity in a matter of three words.  Those three words were "Divide and Conquer" which were attributed to Julius Ceasar but the origination of this phrase is somewhat in dispute.  Regardless, my mother would say these three little words to me almost every Saturday morning in an attempt to encourage me to get my room clean.

Today, on Ronald Reagan's birthday, we celebrate the three little words that were spoken in reference to a political dynamic but that have taken on an even bigger meaning in the age of the Internet.

Back in "the day" when I had an assignment to write a research paper about the Seagulls of the Pacific Northwest I would go over to my neighbors house and ask politely if I could look at their Encyclopedia Brittanica.  They had the entire set!  I would pull out the book with the S on the spine and flip through the pages until I got to the page for Seagulls.  It was easy to get to the truth.

Back in "the day" the phrase "A picture is worth a million words" meant something because the only way to fake a photo was by cutting out another photo and pasting pictures together and then taking another photo of that photo (full utilization of this process was best seen in high schools and colleges around the country in the form of fake ID's).  But these "faked" photos" were typically easily spotted and called out.  Today we have photoshop and while there are cases of really bad photoshop projects there are also brilliant displays of artistry that can fake out even people who were an event that they saw with their own eyes.

How do you check to make sure something you are reading online is actually true?

One great way is to run it by SNOPES.com. Snopes is one of the most reliable reporters of fake internet stories.  If you see something, like a picture of Marty McFly going into the future on any other year than 2015 then check with Snopes.

The FBI also has a page of information on how not to be the victim of a scam.  This is good information to check out - but then again be sure to verify everything yourself.

And, unfortunately, as my friend Sue Scheff has pointed out, you even need to double check and verify where you are donating.  Read her article on Know Where You Donate.

One of the things I loved about Ronald Reagan was his ability to deliver a speech.  Reading his speeches are still interesting but seeing him deliver the speeches was even more impressive.

So today, on February 6th, we remember the importance of finding a trusted source and then verifying the information.

For more about Ronald Reagan and his speeches I recommend you check out:

Reagan In His Own Hand

The Wit & Wisdom of Ronald Reagan

"Every new day begins with possibilities. It's up to us to fill it with the things that move us toward progress and peace."