There is some debate over when World Book Day is to be celebrated exactly.  Some people suggest it is early March while others say it is April 23.

Why April 23?  This is also up to debate.  Some say it is to honor Miguel de Cervantes who died on April 23.  But there is debate there too.  Did he actually die on the 22nd and then was buried on the 23rd?  And did Shakespeare die on April 23?  If I was shaking my Magic 8 ball right now the answer I may be coming up with might be "It is unclear".

Regardless of your method or your exact date of celebration it is a good thing to celebrate books.

So today I am celebrating the great books that have had great influence in my life.  Some of the books influenced me because they were amazing writing and others were powerful merely because of the time and place in which they were read.

What is your list of books?  If you close your eyes right now and think about the great books in your life what is on your list?  Don't look at amazon or good reads or lists you have made in the past.  This list should be only the books that jump out at you when you're not thinking that hard about them.

The Mixed-Up Files of Mrs. Basil E. Frankweiler by E.L. Konigsburg
The Phantom Tollbooth
The Mysterious Disappearance of Leon - I mean Noel
The Hound of the Baskervilles
The Secret Garden
The Diary of Anne Frank

Candide by Voltaire
Zorba the Greek
Still Life with Woodpecker by Tom Robbins
The Death of Roger Ackroyd
Of Men and Mountains by William O. Douglas

I love reading biographies, mysteries and books about adventure.  I have read a large number of the "classics" and love most, but not all, of them - loved the victorian novels Frankenstein Dracula etc and love all of the Edgar Allan Poe stories/poems.  There are a ton of poems that I love especially from Edna St. Vincent Millay (or is it that I just love saying her name) but while they were spectacular they did not move me the way these other books did.  Love Jane Austen, Shakespeare, Thoreau, Twain, Faulkner, and Douglas Adams but they didn't make my list either.  Maybe if I had met them at another time they may have made the list but we can't live our life based on what if's.

Now.  Now that you have made your list put a star by the one book that you have given as a gift most often (or loaned out and never received back the most often).  This is a pretty tough one for me because there are about three of these books that I have given away time and time again.

There is a clear winner for me: 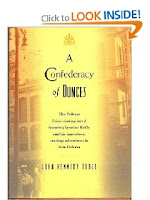 This book had me from the very first page.  I spent alot of time with my dictionary the very first time I read this book because there were a number of words in the story that I was unfamiliar with.  Then after looking up the word I would have a huge smile on my face because it turned out that the author had found THE perfect word for that description of what was going on in the book.  I loved the protagonist even though he was a most unlikely character.  And I loved the setting of New Orleans.  I had never been to NOLA at the time I read the book but I felt as though I could picture every street and balcony.

Confederacy of Dunces is my Desert Island Book (next to the Bible).