Life's An Adventure!: The Musical 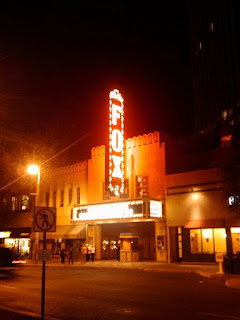 Thank you to all of my loyal Blog readers out there (You know who you are).

All of what you are about to read is TRUE.

Here is how it happened.

My mother was having one of her meetings to organize some local event.  Her meetings are typically more like parties and so she regularly has a pretty good turn out.  During a recent "meeting" one of her friends (you know who you are and so will remain nameless) announced that my Mother was to sit down because they had a skit.  Another person pulled out the script (print version of one of the stories from my blog) and another person pulled out a large box that they had decorated to look like a TV circa 1970's with rabbit ears et al.  Then they pulled out pieces of cardboard which had magazine cut outs of food pasted on to represent TV tables.  They proceeded to re-enact a story about my mother that was previously published on this very blog.  A great time was had by all - except by my mother who had to explain to my loyal readers that on occassion I do exaggerate.

But you never know.  It could happen.  One day you may be looking at the Marquee on some theatre along Broadway and see the words "Life's an Adventure! The Musical" and you can say "I knew her when".