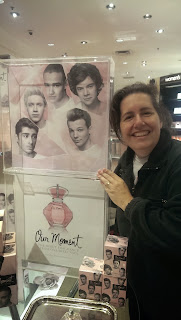 What are you going to smell like in 2014?  I may have to go with Cotton Candy.

Yes - I am a One Direction fan.  I'm in pretty good company with just about every other teenage girl in the entire world.  It's not that I wish I were a teenager again.  I don't.  But I do like positive upbeat music and I like that the boys in the band seem to be having fun and behaving themselves off stage.

If you don't know the One Direction story it is really a marketing marvel. Separately, they all went to the auditions for the Xfactor in the UK.  Simon Cowell saw these guys and suggested that they would probably do really well as a group instead of 5 solo acts.  They are all adorable but also all of them can really sing.  Their music is pop music that has a beat and you can dance to it.  It just makes me smile.

Their antics take me back to fond memories of Hey Hey We're the Monkeys and Harry reminds me a little bit of Davey Jones with Mickey Dolenz hair.

They are either really smart kids or they have very good managers because their marketing is really pretty amazing. They do have a huge fan base and I like that they have been, up to this point, really pretty good role models for their fans.  They are on tour, they have a new album out, they have a movie that is out, and they have a new perfume line.  I must admit that I am more into the jasmine perfume phase of my life and it is a little ridiculous thinking about running around smelling like cotton candy. But I'm not going to rule it out.


So let's make a pledge to work hard but also not take ourselves too serious in 2014.
2014 Marking One Direction Our Moment perfume resolutions Xfactor