Countdown to Comic-Con: 7 days to Go

Posted by HelloThere on July 16, 2014
Cosplay and other words I did not grow up with 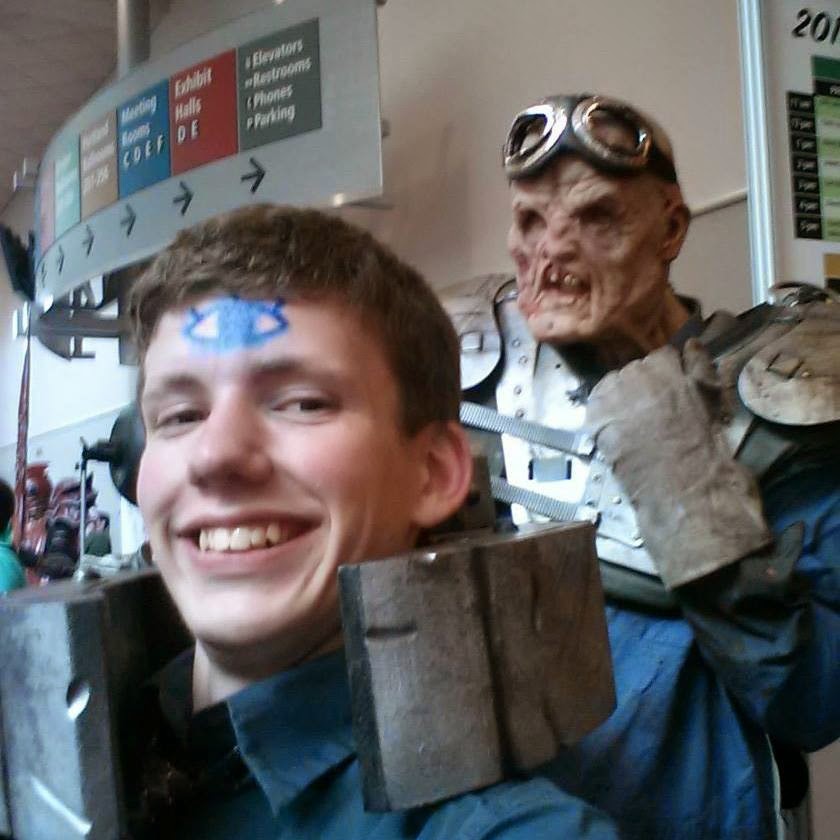 Growing up we had one day a year when we would put on costumes and behave like whatever silly character we were pretending to be. That day was Halloween.

But now with the emergence of Comic-Cons all over the world (since 1970 at least) there are several days throughout the year that provide a reason to dress up.

The word Cosplay actually just means Costume Play.  But it is beyond just putting on a costume.  It also involves the play part where you play the part of the character who you are dressed up like. My kids are really into Cosplay.  They love creating the costumes and participating in the event of it all. Cosplay has become so popular that it has become a whole industry itself.  There are websites, youtube channels, and online stores dedicated to the Cosplayer. This is a picture of Alex at the Rose City Comic-Con cosplaying as Cecil from Welcome to Nightvale (it was near the end of the con and the eye on his forehead had started to blur a little).  I'm not sure who or what the guy behind him is suppose to be but as you can see some people go extreme.

But the word Cosplay is not the only word that is new to this Video Gamer who grew up playing Pong (and loving it).

This post is for my mother who, in 1970 something, called Billy Joel Billy Jackson.  It was painful for me back then and memorable to this day.  The following list of words are ones that are newish to me but are common vernacular with my kids.

Fandom - OK so not so obscure but I thought I would start here.  This is the realm that the fan lives in.  If you are a big fan of Star Wars then you are in the Star Wars Fandom.  That is the kingdom of Star Wars fans.  The great thing is you can live in several fandoms.  You don't necessarily need to be loyal to just one Fan world.  But typically the fandom consists of people who are serious fans.

Fangirling - Back in the 70's we collected Tiger Beat magazine and we all loved Davie Jones, Bobbie Sherman, and David Cassidy.  What we didn't realize was that we were fangirls.  Today when the uber fans of One Direction (for example) go out of their way to show their love they are "fangirling"

Ship - Not a boat.  I had been hearing this word around our house for a long time before realizing they weren't talking about a boat.  It's not even a noun.  Ship is a verb.  If you "ship" a couple on your favorite movie or TV show that means you are rooting for them to become a real couple in the show or to have their relationship grow.  It seems to have come from the word relationship but that is also a noun.  One of the most current couples that we are shipping right now is Oliver and Felicity from Arrow.  She is clearly in love with him but will he allow himself to truly love someone back or does he want to protect the woman he truly loves because everyone else in his life has been destroyed when he gets too close?... Or something like that. Stephen Amell (the star of Arrow) came to the Emerald City Comic-Con and did a fantastic panel and stayed for photos afterwards.  We had not watched any Arrow before that but now we are hooked and have marathoned the series a couple of times now.

OTP - One True Pair.  If you ship a couple on your favorite show you are likely to believe they are the one true pair.  On many shows the people will date various characters before finding their true love but sometimes you know that there is an OTP and it can be frustrating when other people on Tumblr are cheering for your favorite character to connect with someone other than that person who (in your opinion) is their OTP.

Marathon - Not a race.  Also not a noun.  This is a verb.  To Marathon your favorite show or movie series is to sit down (hopefully with friends but not always) and watch and entire series.  Sometimes you can't do this in one sitting because the series is too long.  Last year we marathoned One Tree Hill but that took us most of the year because there were 9 seasons in this series.  Trilogies like Back to the Future can be marathoned in one day.

FanFiction - If you are like Hazel Grace from the Fault in Our Stars you often want to know what happened to a character after the story officially ended.  Now with the Internet you can go online and find out what other people thought might happen to their favorite character after the end of the story because they will write their own FanFiction.  There are entire websites devoted to fanfiction from almost every series. There is a huge Harry Potter FanFiction world online.  Some fanfiction we have read is really terrible but there is some fanfiction out there that is brilliant.

AU - Alternate Universe.  Typically, FanFiction will obide by the rules established in the original series.  But sometimes the fan writer will ask a question like What if Harry Potter had ended up with Hermione? Or even wilder what if one character from one story had connected with another character from an entirely different story.  All rules are bent in the Alternative Universe of these fanfiction stories.

Canon - Canon is a word that I still don't fully understand.  Why Canon?  Where did this word come from? In conversations about our favorite stories (Harry Potter for example) the question of whether Dumbledore is gay or not can be discussed as an interesting theory but it is not Canon.  Canon means that it is true because it is in the writing of the story by the original author.  Was it in the book?  Yes or No.  If yes then it is Canon (true) if not then it is not Canon (not provable).  This topic has been discussed alot at my house because even JK Rowling jumped in after the fact stating that yes, indeed, Dumbledore is gay.  But, in the opinion of the fans here at my house, not even JK Rowling can make that statement Canon because it is not in the original books.  She may have eluded to it and felt that the subtleties in her writing should have been clear on the subject but our crew would argue that they were not sufficient to make the case for Dumbledore being gay.  That is not Canon.

SO I hope this helps all of you over 50.  I am learning a whole new vocabulary and imagine that I will pick up some new lingo next week at Comic-Con.