We went to the theater to see "Back to the Future" and I still remember clearly sitting in the packed theater for Back to the Future II. The movie was great although, for me, not quite as good as the first one. It was still really fun.

We knew going in to the theater to see BTTF Part II that they were filming the third episode simultaneously which totally made sense since there were scenes going back and forth from the present day to the future to the past. But I still remember the moment in the theater when Part II ended and instead of saying "The End" it said "To Be Continued". This was a super new experience for all of us sitting there and there was a major *sigh* and a few "you gotta be kidding me-s" going on. But it was worth the wait. Part III did not disappoint and it elegantly tied the entire series together. 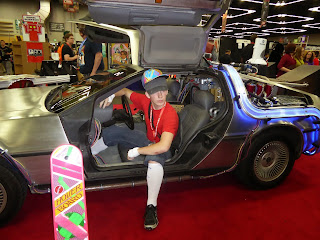 Over the past 25 years we have burned through a couple of VHS tapes and DVDs of the entire series and have enjoyed sharing our favorite moments with other Back to the Future Geeks at a number of ComicCons. When our oldest son (and biggest Back to the Future fan) was 9 we took the kids to Universal Studios and did the backlot tour. When he saw the clock tower in real life I thought I could actually hear the angels singing through the perfectly blue skies. It was a magical moment.

So flash forward to 2015. The year that Marty went Back to the Future in Part II. October 21 was a day we had been waiting for since we first saw the movie in 1989. 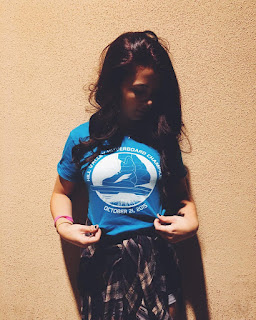 The kids are all scattered at various colleges and celebrating in their own way. Cecilia sported her Hill Valley Hoverboard Champion Tshirt from Good Mythical Morning and the Don't Forget to be Awesome website. I was surprised by the number of people I talked with earlier in the month who had never seen the movie. My mom had a party (of course she did) with her friends who came over and she "rehydrated" a pizza for them. She had never seen the movie before. Unbelievable. She started the movie so that it would end right at 4:29. It was a blast. 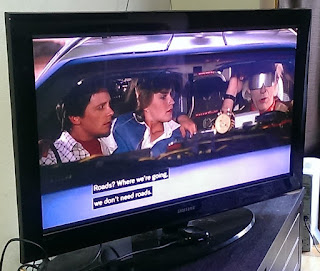 So, now that that has happened where do we go from here?
As Doc Brown says in Part III:

Your future hasn't been written yet.
No one's has.
Your future is whatever you make it,
so make it a good one.

Labels: Back to the Future family movies movie reviews Movies the future is now